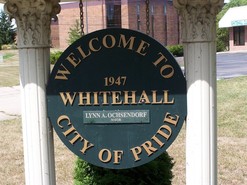 City of Pride...
Since its inception in 1999, the Society has endeavored to discover, document and celebrate its heritage as a truly “All-America” city. It  is indeed among the nation’s best examples of the post-World War II optimism and forward-thinking that characterized America’s collective psyche. The area began as a sleepy farming community that arose along the National Road (aka the Cumberland Trail/U.S. Route 40) in the nineteenth century, connected to Columbus and other communities by the famed interurban railway. http://www.columbusrailroads.com/new/?menu=04Interurbans

Its origins trace back to the early 1800's and the establishment of the National Road. It entered the twentieth century as a logical choice for military operations like Norton Air Field and the Defense Supply  Center Columbus (DSCC and the “Depot”), and saw some of the first suburban expansion east of Columbus with the 1920’s residential neighborhoods of Glenco, the Bernhard Addition and Cedarhurst - - the latter of which arose on land that was formerly a part of the White Hall Farm, from which the city drew its name. Its presence on the National Road lent to the natural expansion eastward, to include the Broad Street location of one of America’s first regional shopping centers, the Town and Country Shopping Center, as well as motels, restaurants, night clubs, and camp sites serving tourists traveling along Route 40.

The post-war housing boom was very evident in Whitehall as thousands of apartments and houses sprung up in the city during the 1950s, making Whitehall the fastest-growing community in the country during that period. In fact - - as the city is actually relatively young - - the majority of events that comprise the city's history are relegated to the 20th century.

We hope you enjoy reminiscing through our city's history from the contents of this growing website, and that you will feel encouraged to help us continue to document and celebrate its heritage.

Our Next Meeting Will Be on Thursday, December 8th at 6:30  PM at MCL Cafeteria.   See Events Page for Details

DONATIONS to the Society in any amount are greatly appreciated! We are a 501 (c) 3, fully self-supporting non-profit organization. Your contribution will help us to operate, and to maintain and improve our headquarters. It is possible that your contribution might play a part in your annual tax filing. Consult your tax professional for advice of this nature.