"In the 1950s, Whitehall, Ohio was the nation’s fastest growing community"

A Brief History of Whitehall 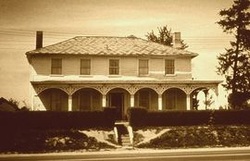 The Whitehall Inn, aka Ye Olde Whitehall Tavern.
In the late 1700's, the area upon which the City sprang  was initially among lands that the federal government gave to Canadian refugees who fought for the colonies - - as a reward for their service. Among them was Robert Taylor, from Nova Scotia, who in 1810 received land in central Ohio between the Scioto River and Big Walnut Creek. The township that was incorporated on land east of  Alum Creek was named Truro, apparently after Mr. Taylor's home in Nova Scotia.

In 1820, a 156-acre tract in the township was transferred, by decree of President James Monroe, to John Long. He and his wife, Elizabeth, transferred the land in 1821 to John M. Walcutt and his wife, Marilla, who in turn transferred it to George Spencer in 1836, for the sum of $5,000. The transfer document calls the parcel "White Hall, and occupied by J. M. Walcutt." It appears to be the first reference to the area as White Hall. The reason for its naming is uncertain, but could relate to the Palace of Whitehall in the Westminster area of central London. Possible also is that Walcutt and his wife Marilla, migrating from Virginia, adopted it from multiple places there with that name. Names of subsequent owners were Brotherton, Wilson, Brockway. Doney and Hoddy, some of whom bought land surrounding the initial 156 acres to expand the farm.

The build date of the original "five-over-four" house that was on the property  is unknown. It was expanded at some point with an addition to the rear that approximated the size of the original, and a covered porch was added to it's front and east facades. It has been traditionally understood that it served as an inn/tavern that served travelers on the National Road, which was extended through the area in the early 1830s. It also is said to have been known unofficially as "Ye Olde Whitehall Inn/Whitehall Tavern. The area in and around the farm came to be unofficially known as Whitehall, and a township school built across from the farm in 1923 was named The Whitehall School.  The long association of the area to that name led to it being chosen for the village when it incorporated in 1947. The house was razed in 1963 to make way for two apartment buildings.

Prior to the Civil War era, Truro Township resident John T. Ward was a "conductor" who established a  stop on the "Underground  Railroad" on the National Road/U.S. Route 40, just  east of today's Hamilton Road, to aid  escaped slaves in their travels north.  His hauling business evolved into today's E. E. Ward Moving and Storage, which  is said to be the nation's oldest minority-owned business. See  http://database.aminahsworld.org/works/81

By the late  19th century, the White Hall Inn/farm was sold to Abram Doney. A small  farming community developed and the name  “Whitehall” was unofficially adopted.  The interurban railway (1902-1929) established a stop at the Inn, and early maps refer to the stop there as "Doney." At least one other later shows the stop's name as "Crumms," reflecting the name of a nearby land owner (and sometimes spelled Krumm/Krumms).

In 1910, Abram’s son, Samuel "Squire" Doney inherited  the entire farm. He had much of it platted into, and sold as, one-acre lots, as the Lowrie Brothers East Broad Street Allotment. The neighborhood that developed  became known as " Cedarhurst,"  and to some is now  informally known as “Old Whitehall.” A township elementary school built at its northern edge in 1923 was called Cedar Hurst School (later renamed East Broad Street Elementary.) Just east of Cedarhurst is Glencoe, a neighborhood developed beginning around 1920. At about  the same time, the Bernhard's First Addition began to develop just south of Glencoe along U.S. Route 40, between Hamilton and Yearling Roads. The neighborhood includes examples of classic Sears  pre-cut "kit" homes available through its catalogs.

After World War I, pilots of military aircraft wanted to continue flying planes for personal  use, and acquired land at the southeast corner of East Broad Street and South Yearling Road. The pilots formed the Aero Club of Columbus on farm land owned by James and Mary Enlows Lamp - - establishing the first air field in Central Ohio.  It became Norton flying field at the urging of the Aero  Club, which lobbied the War Department for its creation. It was named for WWI  pilot Fred W. Norton, an Ohio State University graduate, who was shot down over France in 1918. The air field eventually was closed and the land sold for development of the Norton Homes subdivision in 1949. See http://www.rawlinsbrothers.org/planes/norton.html and http://www.airfields-freeman.com/OH/Airfields_OH_C.htm It also is the site of the recently-built Whitehall branch of the Columbus Metropolitan Library.
As the community grew and  incorporated as  a village in 1947, the Don M. Casto  organization unveiled the Town & Country  Shopping Center, one of the nation’s first regional shopping centers. It  adjoins a large tract occupied  by the Defense Supply Center Columbus, which formerly was known as the Defense Construction Supply Center, and informally as  the "Depot." It was built during World War I, and was most active during World  War II. German prisoners of war worked at the "Depot" under the watchful eyes of  armed guards. The federal  government's Defense Finance Accounting Center is  adjacent to the "Depot" in its own sprawling complex built in the l980s.

For a period of time in the 1950's, the stretch of East  Main Street between Hamilton Road and Robinwood Avenue was known as the "strip,"  and was a destination point for travelers wanting to patronize night clubs and  restaurants. What started as trailer camps gave way to dozens of motels to  provide accommodations for "strip"-goers, and  travelers using U.S. Route 40 to  reach their destinations.

After World War II, the demand for housing by returning veterans gave rise to a rapid pace of residential construction, which included many apartment homes, and the twin  singles of English Village, Parklawn Manor and Woodcliff. Parklawn received the "Award of Merit" during the 1952 convention of the National Association of Home Builders, which cited its many modern amenities and attractive architecture. The single-family  prefabricated homes in the Norton Homes subdivision were built beginning in 1949 where the Norton Air Field had been for some 30 years. The Truro Estates/Country Club Village development provided rental homes to the many transient military  personnel stationed at the "Depot" and at Lockbourne (later Rickenbacker) Air Force Base south of Columbus, as well as U. S. Navy operations  based at John Glenn (formerly Port  Columbus) International Airport. In the 1950s, Whitehall was the nation’s fastest growing community, and a special census in 1956 confirmed a population large enough to quality the village as a city. Overall, population jumped from 4,077 in 1950 to 20,818 in 1960 - - and today remains at  approximately 18,500.